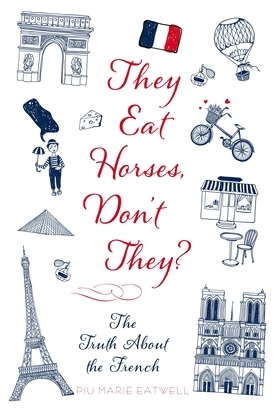 They Eat Horses, Don't They?

They Eat Horses, Don't They?:The Truth About the French tells you what life in France is really like. Do the French eat horses? Do French women bare all on the beach? What is a bidet really used for?

In this hilarious and informative book, Piu Marie Eatwell reveals the truth behind forty-five myths about the French, from the infamous horsemeat banquets of the nineteenth century that inspired an irrepressible rumor, to breaking down our long-held beliefs about French history and society (the French are a nation of cheese-eating surrender monkeys, right?).

Eatwell lived in France for many years and made the most of long French weekends, extended holidays, and paid time off to sit on French beaches, evaluate the sexual allure of the French men and women around her, and, of course, scan café menus for horses and frogs. As a result, They Eat Horses, Don't They? reveals a fascinating picture of historical and contemporary France?a country that has both changed radically in the twenty-first century, but yet still retains much of the mystery, romance, and allure that has seduced foreigners for decades. Truth, as always, is stranger than fiction. . . .