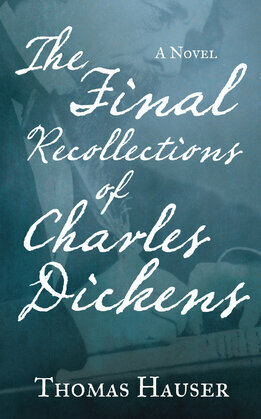 The Final Recollections of Charles Dickens: A Novel

by Thomas Hauser (Author)
Fiction Historical English literature American and Canadian literature
England, 1870: His health failing, his most important work all but done, Charles Dickens is readying himself for the final bed. But there is still one more story that he must tell. As a young journalist just getting his start, Dickens encountered a story that would affect him for the rest of his life.

As his “Sketches by Boz” column is just beginning to find acclaim, young Dickens encounters the wealthy and powerful Charles Wingate. While researching the mysterious businessman, Dickens uncovers a horrific story of corruption and violence, centered on a mutilated prostitute and the murder of her lover. Dickens’s investigation could wreak havoc on Wingate and, more importantly, his beautiful wife Amanda. Dickens, already betrothed to his publisher’s daughter, realizes just how loveless his future marriage will be as he falls in love with Amanda – even as his story threatens to ruin the Wingates.

The Final Recollections of Charles Dickensblends a historically-accurate telling of Dickens’s life with a gripping portrait of betrayal, murder, obsession, and love. It’s the story of Dickens’s deflowering and coming of age, caught between the worlds of England’s ruling elite and the seamy underside of London society. In this experience we witness the seeds being sown for what will become Dickens’s most popular and revered novels, and the social philosophies —rich versus poor —behind them. Meticulously researched and masterfully told, The Final Recollections of Charles Dickens captures the voice of the beloved author, the divided city of London, and the uncertain tenor of the times.