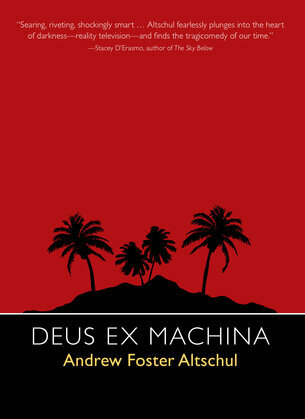 by Andrew Foster Altschul (Author)
Fiction Literary English literature American and Canadian literature
On a distant island, reality show contestants battle for bragging rights and a slot on next week’s episode. They’ve perfected their dramatic roles and are prepared to do whatever it takes to win. There’s the take-no-prisoners Marine sergeant, the gay hairdresser, the ruthless lawyer, the brainy poet. But one player refuses to compete—Gloria Hamm, a sullen dental hygienist, voted least likely to win by the show’s crew.

The higher-ups are desperate for ratings and sensational twists to trump the plots of seasons past. But the producer—haunted by personal tragedies all too real—is losing control of the show and its crew. While he obsesses about Gloria, the crew plots mutiny, a contestant dances with insanity, and disease threatens to halt the show completely. When real catastrophes strike, the producer finds it harder and harder to navigate his surreal landscape, where boundaries of the real, imagined, and orchestrated have blurred beyond recognition.

Deus Ex Machina deconstructs our notions of narrative, revealing how tricky it is for any auteur to disappear from his creation. In an age when people will seemingly do anything to be on television, it asks what is the true nature of "reality," and what is its cost?