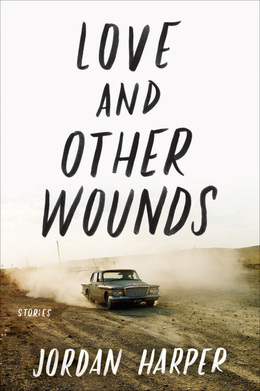 Love and Other Wounds

In the hard-edged tradition of Hubert Selby Jr., Daniel Woodrell, and Donald Ray Pollock, and with the fresh, complex humanity of Breaking Bad and Reservoir Dogs, a blistering debut collection that unsparingly confronts the extreme, brutal parts of the human heart.

A man runs away from his grave and into a maelstrom of bullets and fire. A Hollywood fixer finds love over the corpse of a dead celebrity. A morbidly obese woman imagines a new life with the jewel thief who is scheming to rob the store where she works. A man earns the name “Mad Dog” and lives to regret it.

Denizens of the shadows who live outside the law—from the desolate meth labs of the Ozark Mountains to the dog-fighting rings of Detroit to the lavish Los Angeles mansions of the rich and famous—the characters in Love and Other Wounds all thirst for something seemingly just beyond their reach. Some are on the run, pursued by the law or propelled relentlessly forward by a dangerous past that is disturbingly close. Others are searching for a semblance of peace and stability, and even love, in a fractured world defined by seething violence and ruthless desperation. All are bruised, pushed to their breaking point and beyond, driven to extremes they never imagined.

Crackling with cinematic energy, raw and disquieting yet filled with pathos and a darkly vital humor, Love and Other Wounds is an unforgettable debut from an electrifying new voice.