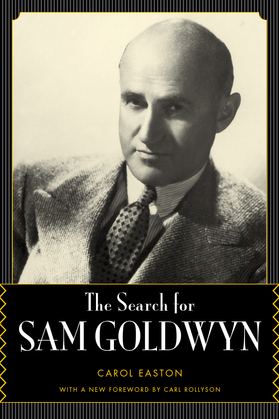 The Search for Sam Goldwyn

Sam Goldwyn’s career spanned almost the entire history of Hollywood. He made his first film, The Squaw Man, in 1913, and he died in 1974 at the age of ninety-one. In the many years between, he produced an enormous number of films—including such classics as Wuthering Heights, Street Scene, Arrowsmith, Dodsworth, The Little Foxes, and The Best Years of Our Lives—and worked with many luminaries—Gary Cooper, Ronald Colman, Laurence Olivier, George Balanchine, Lillian Hellman, Howard Hawks, John Ford, Eddie Cantor, Busby Berkeley, Danny Kaye, Merle Oberon, and Bob Hope among them. When Samuel Goldfisch was born in the Warsaw ghetto, he was penniless; when Sam Goldwyn died in Los Angeles, he was worth an estimated $19 million.

The Search for Sam Goldwyn locates the real Sam Goldwyn and shatters the “hostile conspiracy of silence” that protected his legend. In writing Goldwyn’s story, Carol Easton has given us a fine examination of “the civilization known as Hollywood” and how Goldwyn himself shaped that culture.