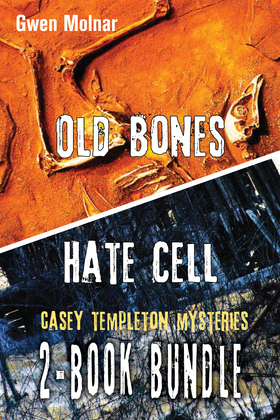 In Hate Cell, thirteen-year-old Casey Templeton has recently moved to the southeastern Alberta town of Richford. One night Casey seeks refuge from a snowstorm in an abandoned farmhouse and stumbles upon his nearly frozen, unconscious science teacher, Mr. Deverell. Casey attempts to revive his teacher and searches the house for something to make a fire. In the attic he makes a frightening discovery — an office filled with computers, a printer, and racist posters and flyers!

Soon the RCMP and Casey’s hacker brother, Hank, get involved in the mystery, but it’s Casey who leads the investigation into a warped world where hate is marketed on the Internet and innocent people are preyed on by bigots and bullies.

In Old Bones, while helping with a real dinosaur dig at the world-famous Royal Tyrrell Museum, Casey finds a piece of dinosaur tooth. Excited, he spends all afternoon looking for the rest of the tooth, but all he ends up getting is a nasty sunburn. Lying in his hotel room that night, trying to recover, he sees and hears two men in a nearby room planning a robbery of precious artifacts from the Tyrrell.

As the summer comes to an end, Casey and his friend Mandy decide to relax and take a bicycle jaunt north of Drumheller. But on the road they accidentally meet up with the conspirators and soon find themselves in a grim situation. Casey has to use all his ingenuity and skills to escape so he can try to help thwart the planned heist. Can he do it?