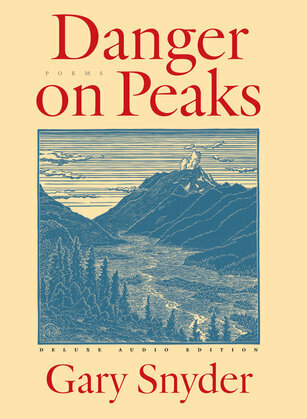 by Gary Snyder (Author)
Fiction Poetry
We are proud to continue our project of publishing Deluxe Audio Editions of the poems of Gary Snyder, read by him. When first published in 2004, it was the poet’s first new collection of poems in twenty years. Perhaps his most personal, autobiographical collection, it begins with the young poet ascending Mt. St. Helens in 1945, a climb accidentally timed with the bombing of Hiroshima and Nagasaki. He was 15 years old. Almost sixty years later, after the great Buddhas at Bamiyan Valley were bombed and with the victims of the World Trade Center also “turned to dust,” the poet composed a prayer while at Short Grass Temple in Senso-ji, a pilgrim on the path of Kannon, Goddess of Mercy.

This remarkable collection was greeted with broad praise, and as Julia Martin proclaimed, “Moving between relative and absolute ways of seeing, [Snyder] responds to the experience of global conflict and personal pain by reminding readers of the continuity of wildness, affirming the value of art, and invoking an ancient practice of wisdom and compassion.”