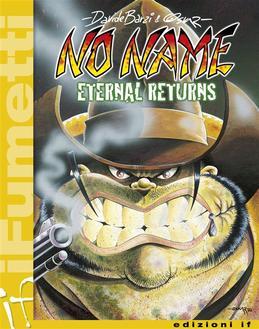 by Davide Barzi (Author), Oskar (Author)
Buy for €1.99 Excerpt
Fiction Comics & graphic novels Superheroes
warning_amber
One or more licenses for this book have been acquired by your organisation details

Do you know those monolithic superheroes, with a muscular and sturdy look, with bright and tight costumes? Good, now forget them… Masakatsu Noname, also known as No Name, obese creature born from the mind of writer Davide Barzi and the pencil of artist Oskar, is the most unconventional and foolish superhero you can imagine.

The most shocking thing, however, is that as soon as he gets on the scene No Name is subject, thanks to his wicked creators, to an abrupt death. End of story? No way. Even if “clinically dead”, the overflowing character comes back from the afterlife in his (more or less….) best shape ever.

That’s how his journey begins, clashing first with the Geriatrics Four in a lab worth of doctor Frankenstein. Then, No Name embarks himself in a blood feud in an Old West that is more Old West that the Old West itself, against John John Smith Smith (and that is not typing error), best known as “The President”.

For the ones starting to sense it, No Name is a breezy and irreverent miniseries in the grotesque vein of the best tradition of Italian comics (Oskar has inked Alan Ford for a long time), and uses screwball comedy as its weapon of choice to actually stage a parody of the genres, comic book or not.

Conceived to be sold in comic book stores only, the miniseries is made of four adventures, preceded by a “Issue #0”, first published between 1998 and 2004. This ePub collects for the first time ever the first story and the first two issues, “Clinically Dead” and “Westerngate”. A second ePub will finish the saga with “Tefkas or Death” and “Maciste versus everybody”.