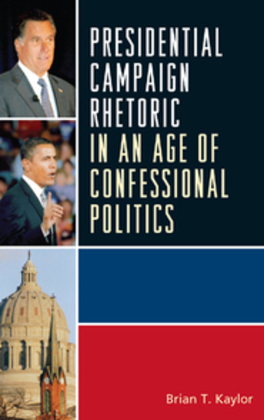 Presidential Campaign Rhetoric in an Age of Confessional Politics

When a Bible-quoting Sunday School teacher, Jimmy Carter, won the 1976 presidential election, it marked the start of a new era of presidential campaign discourse. The successful candidates since then have followed Carter's lead in publicly testifying about their personal religious beliefs and invoking God to justify their public policy positions and their political visions. With this new confessional political style, the candidates have repudiated the former perspective of a civil-religious contract that kept political leaders from being too religious and religious leaders from being too political. Presidential Campaign Rhetoric in the Age of Confessional Politics analyzes the religious-political discourse used by presidential nominees from 1976-2008, and then describes key characteristics of their confessional rhetoric that represent a substantial shift from the tenets of the civil-religious contract. This new confessional political style is characterized by religious-political rhetoric that is testimonial, partisan, sectarian, and liturgical in nature. In order to understand why candidates have radically adjusted their God talk on the campaign trail, important religious-political shifts in American society since the 1950s are examined, which demonstrate the rhetorical demands evangelical religious leaders have placed upon our would-be national leaders. Brian T. Kaylor utilizes Michel Foucault's work on the confession_with theoretical adjustments_to critique the significant problems of the confessional political era. With clear analyses and unsettling relevance, Kaylor's critique of contemporary political discourse will rouse the interest and concern of engaged citizens everywhere.