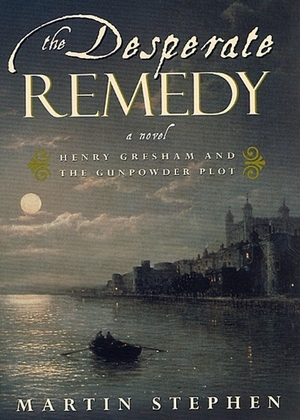 Thief. Informer. Double-dealer. Pimp. Will Shadwell may not be the most moral of men, but to gentleman spy Henry Gresham he is invaluable. During the reign of King James I a man must know his enemies to survive and Shadwell is one of Gresham's best sources.

Then Shadwell is discovered brutally murdered. And before Gresham is able to establish why, he is summoned by the man he fears most: Robert Cecil, the King's Machiavellian Chief Secretary. Cecil wants Gresham to investigate Sir Francis Bacon's private life. When Gresham begins his inquiries, he uncovers a plot so audacious it is scarcely believable: a conspiring clutch of Catholic lords and a trail of gunpowder underneath the Houses of Parliament.

From the court of King James to the deadly underworld of Jacobean London, Martin Stephen's superb debut novel is as rich in atmosphere as it is in tension. Historical fiction of the highest order, The Desperate Remedy is a thrilling tale of courtly machinations.