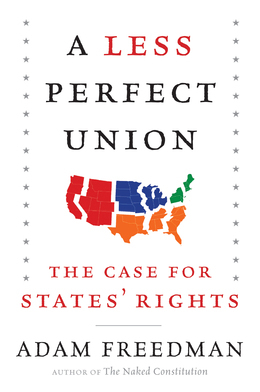 One of America’s leading conservative commentators on constitutional law provides an illuminating history of states’ rights, and the vital importance of reviving them today.

Liberals believe that the argument for “states’ rights” is a smokescreen for racist repression. But historically, the doctrine of states’ rights has been an honorable tradition—a necessary component of constitutional government and a protector of American freedoms. Our Constitution is largely devoted to restraining the federal government and protecting state sovereignty. Yet for decades, Adam Freedman contends, the federal government has usurped rights that belong to the states in a veritable coup.

In A Less Perfect Union, Freedman provides a detailed and lively history of the development and creation of states’ rights, from the constitutional convention through the Civil War and the New Deal to today. Surveying the latest developments in Congress and the state capitals, he finds a growing sympathy for states’ rights on both sides of the aisle. Freedman makes the case for a return to states’ rights as the only way to protect America, to serve as a check against the tyranny of federal overreach, take power out of the hands of the special interests and crony capitalists in Washington, and realize the Founders’ vision of libertarian freedom—a nation in which states are free to address the health, safety, and economic well-being of their citizens without federal coercion and crippling bureaucratic red tape.