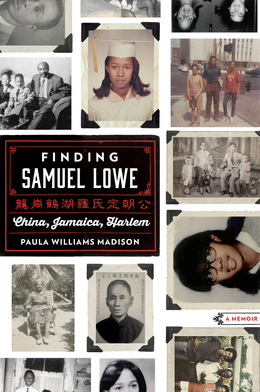 This powerful debut tells the story of Paula Williams Madison's Chinese grandfather, Samuel Lowe. He became romantically involved with a Jamaican woman, Paula's grandmother, and they lived together modestly with their daughter in his Kingston dry goods store, Chiney Shop. In 1920 his Chinese soon-to-be wife arrived to set up a "proper" family. When he requested to take his three-year-old daughter with him, Paula's jealous grandmother made sure that Lowe never saw his child again. That began an almost one-hundred-year break in their family.

Years later, the arrival of her only grandchild raising questions about family and legacy, Paula decided to search for Samuel Lowe's descendants in China. With the support of her brothers and the help of encouraging strangers, a determined Paula eventually pieced together her grandfather's life, following his story from China to Jamaica and back.

Her amazing search is vividly rendered. Paula has produced an emotional memoir that travels from Toronto to Jamaica to China. Using old documents, digital records, and referrals from the insular and interrelated Chinese-Jamaican community, she found three hundred long-lost relatives in Shenzhen and Guangzhou, China. She even located documented family lineage that traces back three thousand years to 1006 BC. Her wonderfully warm elders, all born in Jamaica and raised in China, shared the history and accomplishments of the Lowes in the East and the West, as well as the hardships and persecution suffered by her capitalist grandfather during the Communist era and the Cultural Revolution.

Finding Samuel Lowe is a remarkable journey about one woman's path to self-discovery. It is a story about love and devotion that transcends time and race, and a beautiful reflection of the power of family and the interconnectedness of our world.