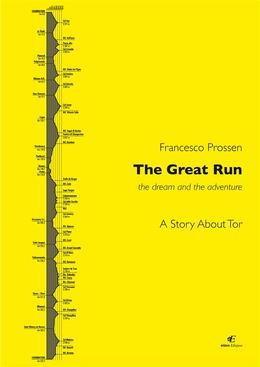 ”Mind!! You could consider this book as a doping” Marco writes in a comment.

“I did Tor three times.. three times arrived in Courmayeur.. It's very hard, it's killing.. it's long but marvelous... I can't wait to do it again in 2015” francesco prossen

The Great Run – the Dream and the Adventure is the book in which Francesco Prossen (italian writer and trailer) talks about his adventure as a “normal” runner during the TOR of 2011 and 2012.
What comes from reading the following pages is a full immersion in the Tor experienced by Francesco like all the other runners living the TOR. It’s not about a sports challenge anymore: it’s a life challenge. A journey in the middle of a unique natural environment, with unexpected encounters, while discovering our own limits, both physical and mental. It’s the chance to think about ourselves and our own world, the opportunity to understand how small we are, compared to what surrounds us and to become conscious of our role in life.
A part of Introduction of the book by Alessandra Nicoletti
Event Director, VDA Trailers Ssdrl President.
A real adventure that captures you completely and puts you face to face with the nature of one of the most wild and pristine in the world. Mont Blanc, Gran Paradiso, Monte Rosa, the Matterhorn and all their chains of mountains; no less beautiful and equally fascinating is the environment in which this incredible race unfolds.
A race of 330 km and 24,000 meters in altitude up and down the mountains through the valleys and their streams.
How to define this kind of race. According to me I was tempted to talk about it as a great stroke of the soul, where fatigue, injuries, lack of sleep and proper nutrition, physical risks, fellowship with men and nature, open inner spectacular and magnificent scenery.
Experiences, emotions and intuitions create a rut, a new track in the relationship with ourselves and the life around.
With this book I wanted to see the man placed in this great context. The man who honors a wonderful and full of inspiration environment while engaged in a true race.
Step by step live from Tor.
Francesco Prossen: Scorpio, 1966, born in Genoa (Italy), he began to get passionated to trail in 2008. His first love is the Rigantoca, the mountains inland of Genoa. After the first challenging tests, Gran Trail Trail Rensen and 3c, completed many trials and overall UTMB 2010, UTMB 2011 Tor des Geants 2011 Cro-Magnon 2012 and Tor des Geants 2012 , Lavaredo Ultratrail 2013 Gran Trail Courmayeur, 2013, Tor des Geants 2013 Cro-Magnon 2014