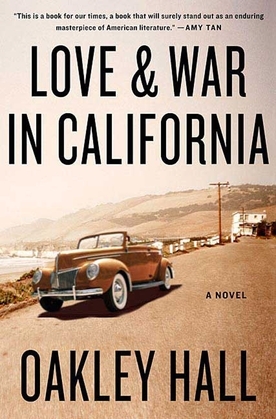 Love and War in California

The Sweeping Novel of a Twentieth-Century California Life

Love and War in California tells the story, through the eyes of Payton Daltrey, of the last sixty years of an evolving America.
The award-winning author Oakley Hall begins his newest work in 1940s San Diego, where his endearing, wide-eyed narrator must define his identity in terms of self, family, and World War II. As his classmates disappear into the war one by one, he becomes obsessed with abuses of power and embroiled with the charming, dangerous Errol Flynn; with the Red Baiting of the American Legion; with the House Un-American Activities Committee; and with the Japanese interment at Manzanar. Nevertheless, Payton, too, must go to the war, where he is a part of the invasion of Europe and that proving of the American soldier: the Battle of the Bulge. After war's end and time in New York, he returns to California as a writer and a seeker, whose old, long-lost love rises from the ashes to show him who he really is.
Hall has been called a "master craftsman" (Amy Tan) with "one of the finest prose styles around" (Michael Chabon), and he has received the PEN Center USA West Award of Honor and the P&W Writers for Writers Award. Coming on the heels of Hall's San Francisco Chronicle bestseller (a reissue of his classic Western, Warlock), Love and War in California is more than a novel about a young boy who grows old. It's about how the passions of youth become the verities of age, and how we evolve as a nation, a country, and a people during times that are all at once turbulent, dangerous, and stirring.