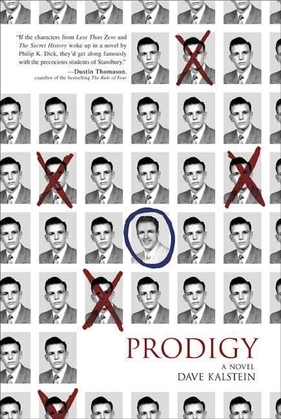 "If the characters from Less Than Zero and The Secret History woke up in a novel by Philip K. Dick, they'd get along famously with the precocious students of Stansbury."
?Dustin Thomason, bestselling author of The Rule of Four

A thriller set in the future at an ultra-elite prep school that asks: what is the price of perfection?

In the year 2036, the world's best boarding school is the Stansbury School. The students, better known as specimens, are screened at a young age and then given twelve years of the finest education -- and developmental drug regiment --available.

Stansbury graduates -- physically and mentally -- are in a class all by themselves. Four out of five go on to Harvard, Yale or Princeton; twenty out of the top thirty Forbes 500 companies have Stansbury CEOs, eight graduates have become U. S. Senators, and two sit on the Supreme Court.

But when a string of alumni are murdered, school officials -- looking to avoid a public relations disaster -- decide to keep the police in the dark.

They discreetly ask the school's Valedictorian to solve the mystery, but he discovers that the most obvious culprit (the school's resident chemically imbalanced delinquent -- and the Valedictorian's nemesis) is being framed.

Together, the two unlikely allies uncover a massive conspiracy that reaches to the highest levels of the Stansbury administration and the United States government.

A riveting thriller about America's obsession with genius and the potential of youth, Dave Kalstein's Prodigy is not only a chilling vision of the very near future, it's an authentic coming-of-age story for the 21st Century.