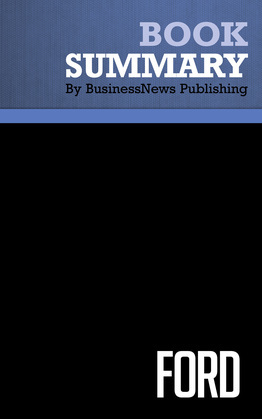 This work offers a summary of the book “FORD: The Men and the Machine” by Robert Lacey.“Bell and the telephone. Edison and the light bulb, the Wright brothers and the airplane. Henry Ford and his motorcar fit neatly into this familiar pantheon of American hero-inventors – except that Henry Ford was not an inventor. Bell, Edison and the Wright brothers all personally devised the machines that made them famous, but Henry Ford’s achievement was built on the work of others.’’In Ford: The Men and the Machine, Master biographer Robert Lacey tells the fascinating story of the men and women behind a giant of the automobile industry. In this entertaining and detailed biography, the author focuses on the public and private lives of manufacturer Henry Ford, his son Edsel and his grandson Henry II. Lacey explains how this family-run business empire transformed our way of life. This excellent work includes Ford's early failures, Henry Ford’s revolutionary standards and the triumph of the Model T, Edsel's struggle with his father, and Henry Ford II's rebuilding after World War II. Thoroughly researched and filled with anecdotes, Ford: The Men and the Machine provides a good insight into the Ford Motor Company and the Ford family.