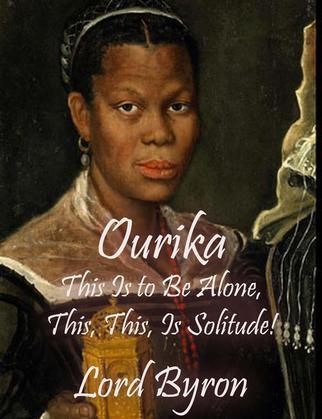 Ourika : This Is to Be Alone, This, This, Is Solitude!

Ourika is a delightful tale set in France during the French Revolution. George Gordon Byron (1788–1824), commonly known simply as Lord Byron, was an English poet and a leading figure in the Romantic movement.

Ourika, was published in 1823, de Duras' novel represents a number of firsts: the first novel set in Europe to have a black heroine; the first French literary work narrated by a black female; and the first serious attempt by a white author to express the feelings of a black character.

The story is based on a true account of a Senegalese girl rescued from slavery and raised by an aristocratic French family.

When Ourika overhears a conversation that makes her aware of her race and the prejudices it produces, her reality is shattered. This revelation causes her to become ill and no longer able to enjoy the lifestyle to which she is accustomed. Her struggle to reject living as a French woman and to exist as a black woman causes her to choose an "invisible" subsistence by removing mirrors and by wearing gloves to cover her hands and dresses to hide her neck and arms. This enchanting story will be enjoyed by all. Lillian Lewis