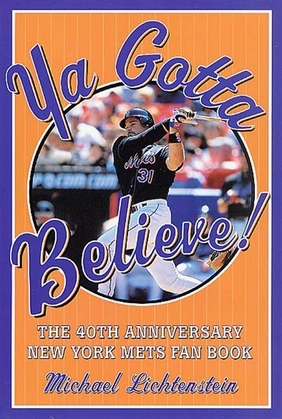 Are you a true Mets fan? Were you there when they won the 1986 World Series in the seventh game? Did you stand and cheer as the Mets demolished the St. Louis Cardinals to become the National League Champions in 2000? Do you know why the original team colors were orange and blue? How much do you really know about those lovable heroes who have brought fortune, glory, and two World Championship trophies to New York? Are you a true believer?

Do you know:
*Who the Hall of Fame outfielder was who played for the Mets in their
inaugural season and went on to become a broadcaster for the Philadelphia Phillies?
*Which Mets outfielder ran the bases backward after hitting his
100th career home run in a game in 1963?
*Which rookie outfielder swiped 24 bases in 1981 and became one of the most popular players ever to play for the Mets?
*When Tom Seaver's rookie year was?
*Who holds the single-season Mets record for home runs?
It's all here, with highlights of the team's exciting history, from the club's beginnings in 1962 to today, including postseason play. From Casey Stengal to Tom Seaver; from Doc to Mookie-- to Mike and Fonzie-questions and answers, sidebars, fascinating bios and photos gathered by lifelong Mets fan Michael Lichtenstein. Much more than just facts and trivia, Ya Gotta Believe! is something no Mets fan can do without.