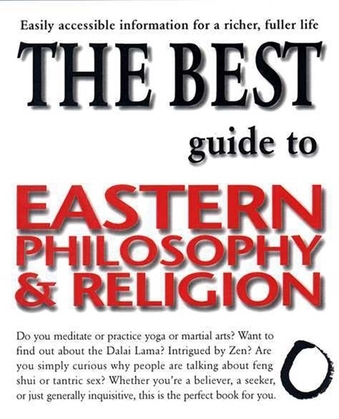 The Best Guide to Eastern Philosophy and Religion

The Best Guide to Eastern Philosophy & Religion provides a thorough discussion of the most widely practiced belief systems of the East.

Author Diane Morgan understands how to direct the materialistic, linear way of Western thinking toward a comprehension of the cyclical, metaphysical essence of Eastern philosophy. With an emphasis on the tenets and customs that Western seekers find most compelling, this text is accessible to the novice yet sophisticated enough for the experienced reader.

Inside, you'll find complete coverage of Hinduism, Buddhism, Confucianism, and Taoism, as well as the less-widely practiced faiths of Shintoism, Jainism, Sikhism, and Zoroastrianism. Learn the fundamentals of the tantric path to liberation and the relationship between sex and seeking. Discover the true meaning of Feng Shui, the philosophical underpinnings of Hatha Yoga and Taoist connection to the martial art of Tai chi chuan. And if you've ever wondered: what is the sound of one hand clapping?, this book will get you started on finding that answer.

The Eastern traditions, with their emphasis on harmony and oneness, have much to offer us in our hectic, demanding lives. For a comprehensive, entertaining exploration of the beliefs of Asia, The Best Guide to Eastern Philosophy & Religion is the essential manual for the seeker in all of us.