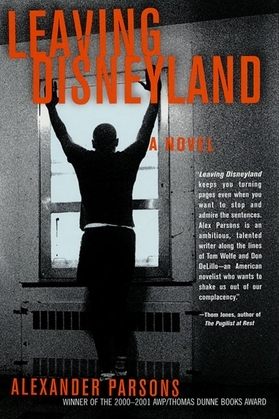 In Alexander Parsons's Leaving Disneyland, Doc Kane is sixteen years into a twenty-year murder sentence. Days away from a parole hearing, he means to get out and start a new life as a Square John--a law-abiding citizen. Within the predatory confines of Tyburn Penitentiary, however, he has debts to pay. To start, Doc has his duties as a "heavy" in the D.C. Blacks, a gang that has protected him. Then there is his new cellmate, a young dealer doing life without parole whose ignorance of the prison's code threatens them both. Finally, there are the guards: Sergeant Grippe, who is bent on "rehabilitating" Doc, and Raven, whose intentions are veiled but no less menacing.

Beyond these dangers, Doc faces a deeper dilemma, one embodied by Dead Earl, a thumbless junkie and reminder of a past Doc would deny. The experience of sixteen years surviving in a violent prison has shaped Doc as profoundly as a river does its course. And if character is fate, Doc's chances for a life on the straight-and-narrow are slim unless he can reshape himself. This, he discovers, is the real struggle. If he's to have any hope for his future, he must first confront his past.