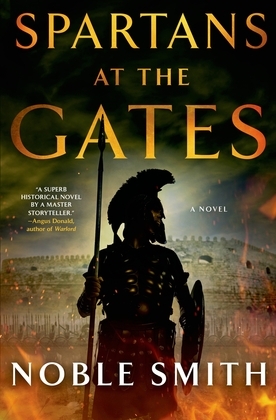 Spartans at the Gates: A Novel

The Peloponnesian War has begun. An army of merciless Spartan invaders have arrived at the gates of Plataea, bent on obliterating the independent city-state and its inhabitants. Plataea's oldest allies, the Athenians, are spread too thin in their own campaigns to send help. Cut off and alone, the Plataeans have dug in behind their high walls for the coming attack, while the tyrannical Spartans prepare to lay siege.

On a rugged mountain road, a young Plataean warrior named Nikias rides to Athens on an urgent quest. He carries with him a bag of ill-gotten gold, hoping to raise an army of mercenaries to help defend his citadel from the Spartan assault. But in the sprawling stronghold of Athens, Nikias encounters perils that prove to be more dangerous than those he has faced on the battlefield.

Noble Smith's Spartans at the Gates transports us to the dawn of one of history's most famous wars--a fight that would tear apart the great powers of ancient Greece.