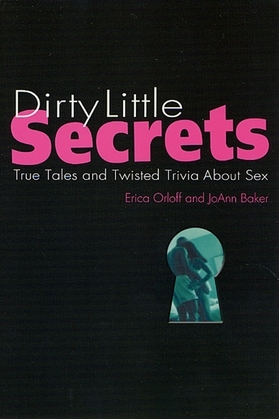 *That, until the mid-1600s, scientists believed that each sperm cell contained a tiny human being?

*That Romans and Egyptians used condoms, but it wasn't until a physician crafted one from a sheep's intestine for England's notorious Charles II that the term "sheepskin" came into use?

*That by playing Six Degrees of Sexual Separation you can get Carmen Electra into bed with Joan Collins--or Al Pacino into bed with Frank Sinatra--in just six easy steps?

From the Temple of the Vestal Virgins to the Washington Monument, this comprehensive, sometimes irreverent, and always uproarious exploration of sexuality delves deep undercover to bring readers the most fascinating and scandalous information availible on humanity's oldest (and still favorite) preoccupation, in Erica Orloff and JoAnn Baker's Dirty Little Secrets.