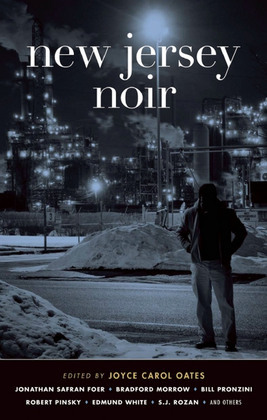 Akashic Books continues its award-winning series of original noir anthologies, launched in 2004 with Brooklyn Noir. Each volume is compromised of all-new stories, each one set in a distinct location within the geographical area of the book. In New Jersey Noir, a star-studded cast of authors sifts through the hidden dirt of the Garden State.

“Oates’s introduction to Akashic’s noir volume dedicated to the Garden State, with its evocative definition of the genre, is alone worth the price of the book . . . Highlights include Lou Manfredo’s “Soul Anatomy,” in which a politically connected rookie cop is involved in a fatal shooting in Camden; S.J. Rozan’s “New Day Newark,” in which an elderly woman takes a stand against two drug-dealing gangs; and Jonathan Santlofer’s “Lola,” in which a struggling Hoboken artist finds his muse . . . . Poems by C.K. Williams, Paul Muldoon, and others—plus photos by Gerald Slota—enhance this distinguished entry.” —Publishers Weekly

“It was inevitable that this fine noir series would reach New Jersey. It took longer than some readers might have wanted, but, oh boy, was it worth the wait . . . More than most of the entries in the series, this volume is about mood and atmosphere more than it is about plot and character . . . It should go without saying that regular readers of the noir series will seek this one out, but beyond that, the book also serves as a very good introduction to what is a popular but often misunderstood term and style of writing.” —Booklist, Starred Review