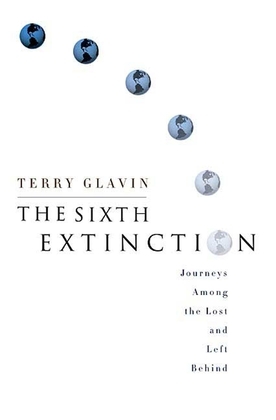 The Sixth Extinction is a haunting account of the age in which we live. Ecologists are calling it the Sixth Great Extinction, and the world isn't losing just its ecological legacy; also vanishing is a vast human legacy of languages and our ways of living, seeing, and knowing.
Terry Glavin confirms that we are in the midst of a nearly unprecedented, catastrophic vanishing of animals, plants, and human cultures. He argues that the language of environmentalism is inadequate in describing the unraveling of the vast system in which all these extinctions are actually related. And he writes that we're no longer gaining knowledge with every generation. We're losing it.
In the face of what he describes as a dark and gathering sameness upon the Earth, Glavin embarks on a global journey to meet the very things we're losing (a distinct species every ten minutes, a unique vegetable variety every six hours, an entire language every two weeks) and on the way encounters some of the world's wonderful, rare things: a human-sized salmon in Russia; a mysterious Sino-Tibetan song-language; a Malayan tiger, the last of its kind; and a strange tomato that tastes just like black cherry ice cream. And he finds hope in the most unlikely places---a macaw roost in Costa Rica; a small village in Ireland; a relic community of Norse whalers in the North Atlantic; the vault beneath the Royal Botanical Garden at Kew; and the throne room of the Angh of Longwa in the eastern Himalayas.
A fresh narrative take on the usual doom and gloom environmentalism, The Sixth Extinction draws upon zoology, biology, ecology, anthropology, and mythology to share the joys hidden within the long human struggle to conserve the world's living things. Here, we find hope in what's left: the absolute and stunning beauty in the Earth's last cultures and creatures.