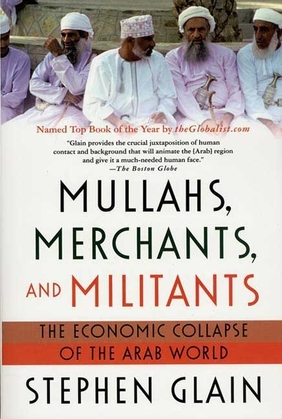 A thousand years ago, a vast Arab empire stretched from the Asian steppe across the Mediterranean to Spain, pioneering new technologies, sciences, art and culture. Arab traders and Arab currencies dominated the global economy in ways Western multinationals and the dollar do today.

A thousand years later, Arab states are in decay. Official corruption and ineptitude have eroded state authority and created a vacuum that militant Islam has rushed to fill. In Mullahs, Merchants, and Militants, Glain takes us on a journey through the heart of what were once the great Islamic caliphates, the countries now known as Lebanon, Syria, Jordan, Israel/Palestine, Iraq and Egypt, to illustrate how a once prosperous and enlightened civilization finds itself at a crossroads between a Dark Age and a New Dawn.

As late as a century ago, what we call the Levant was a prosperous trading bloc. By carving the region into proxy states and emirates after the First World War, the Western powers Balkanized and undermined the Levantine economy. That in turn prepared the ground for a regional autocracy that rejected economic openness and religious tolerance, qualities that had made the old Islamic caliphates great. Today the Arab world has opted out of the global economy, with tragic consequences. It is up to the new generation of leaders -- and the Western governments that created the modern Middle East -- to reverse the sclerosis and revive the region.