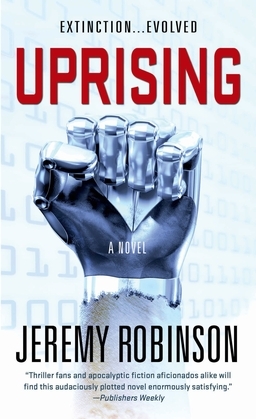 Freeman is a genius with an uncommon mixture of memory, intelligence and creativity. He lives in a worldwide utopia, but it was not always so. There was a time known as the Grind?when Freeman's people lived as slaves to another race referred to simply as "Master." They were property. But a civil rights movement emerged. Change seemed near, but the Masters refused to bend. Instead, they declared war.

Now, the freed world is threatened by a virus, spread through bites, sweeping through the population. Those infected are propelled to violence, driven to disperse the virus. Uniquely suited to respond to this new threat, Freeman searches for a cure, but instead finds the source?the Masters, intent on reclaiming the world. Freeman must fight for his life, for his friends and for the truth, which is far more complex and dangerous than he ever imagined.

Robinson's lightning fast, cutting-edge novels have won over thriller, horror, science-fiction and action/adventure fans alike, and he has received high praise from peers like James Rollins, Jonathan Maberry, and Scott Sigler. XOM-B is a wildly inventive zombie novel with a high-tech twist that will keep readers guessing until the very last sentence.