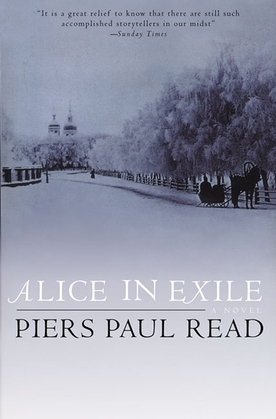 By critically acclaimed author Piers Paul Read, Alice in Exile is an exquisite historical novel featuring Alice Fry--a free-thinking and independent-minded woman in a world ruled by men--and the two men who love her. It is 1913 when Alice, the daughter of a radical publisher, meets Edward Cobb, the eligible young son of a baronet who has recently quit the army to pursue his political ambitions. Edward's family could accept his liaison with a girl they consider "fast," but when he proposes, they are appalled.

When Alice's father becomes involved in a scandal, it becomes clear that Edward must choose between Alice and his political career. He breaks off the engagement, unaware that his lover is expecting his child. Desperate, Alice accepts the offer of a rich and charming (if somewhat predatory) Baron Rettenberg, returning to Russia with him to serve as a governess for his children, while Edward marries suitably, but unhappily.

Two of the greatest cataclysms of the twentieth century--the Russian Revolution and World War I--serve as backdrops to Alice's story as she raises her young son, yearns for Edward, and begins to fall passionately for the Baron.

Alice in Exile is Piers Paul Read's triumphant return to the fiction for which he is widely hailed--romantic, dramatic, and rich with historical detail and fascinating characters that make Alice's story an enchanting and unforgettable read.