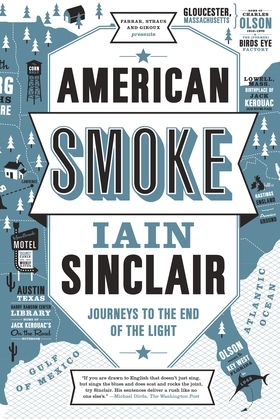 "How best to describe Iain Sinclair?" asks Robert Macfarlane in The Guardian. "A literary mud-larker and tip-picker? A Travelodge tramp (his phrase)? A middle-class dropout with a gift for bullshit (also his phrase)? A toxicologist of the twenty-first-century landscape? A historian of countercultures and occulted pasts? An intemperate WALL-E, compulsively collecting and compacting the city's textual waste? A psycho-geographer (from which term Sinclair has been rowing away ever since he helped launch it into the mainstream)? He's all of these, and more."
Now, for the first time, the enigma that is Iain Sinclair lands on American shores for his long-awaited engagement with the memory-filled landscapes of the American Beats and their fellow travelers.
A book filled with bad journeys and fated decisions, American Smoke is an epic walk in the footsteps of Malcolm Lowry, Charles Olson, Jack Kerouac, William Burroughs, Gary Snyder, and others, heated by obsession (the Old West, volcanoes, Mexico) and enlivened by false memories, broken reports, and strange adventures.
With American Smoke, Sinclair confirms his place as the most innovative of our chroniclers of the contemporary.