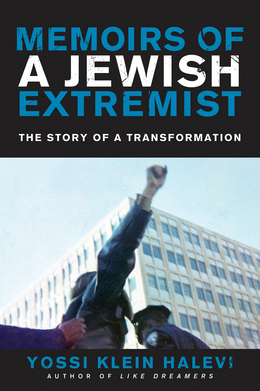 Memoirs of a Jewish Extremist

Now available in paperback for the first time, with a new introduction, the poignant and insightful memoir from Yossi Klein Halevi, the award-winning journalist and author of the acclaimed Like Dreamers—a coming-of-age story about a traumatic family history, radical politics, and spiritual transformation that speaks to a new generation struggling to understand what it means to be Jewish in America.

The child of a Holocaust survivor, Yossi Klein Halevi grew up in 1960s Brooklyn perceiving reality through the lens of his family’s brutal past. Increasingly identifying with their history of suffering, he regarded the non-Jewish world with fear and loathing. Determined to take action—and seek retribution—he became a disciple of the late rabbi Meir Kahane and a member of the radical fringe of the American Jewish community.

In this wry and moving account, Halevi explores the deep-rooted anger of his adolescence and early adulthood that fueled his increasingly aggressive activism. He reveals how he started to question his beliefs—and his self-inflicted suffering as a hostage of history—and see the world from his own clear perspective.

As a journalist and author, Halevi has dedicated himself to fostering interfaith reconciliation. Memoirs of a Jewish Extremist explains how such a transformation can happen—giving hope that peaceful coexistence between faiths is possible.