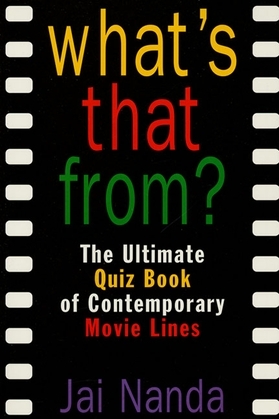 Do you know what films have given us the following quotes?
"What we have here is a failure to communicate."
"Excuse me while I whip this out."
"Would somebody get this walking carpet out of my way?"
"I don't know why they call this stuff Hamburger Helper, it does just fine by itself."

And how are you at movie trivia?
In The Blues Brothers why are Jake and Elwood "puttin' the band back together"? In Airplane!, which dinner was poisoned: the fish or the chicken? True or False: Diane Keaton won the Academy Award for Best Actress for her performance in Annie Hall.

For the movie buff and video hound, Jai Nanda's What's that From? provides hours of entertainment. You can test your knowledge with more than 1,000 quotes and questions from more than 250 contemporary films--from Academy Award winners to cult classics. Also included are bonus questions on actors and directors, special categories on individual actors, movies, and themes (Western, baseball, sequels), plus a section devoted exclusively to Academy Award-winning performances.

It's all here in the ultimate tribute to the great movies of the seventies, eighties, and nineties from National Lampoon's Animal House to When Harry Met Sally... So the next time you hear someone say, "It's just a flesh wound, " you won't have to ask "What's that from?"