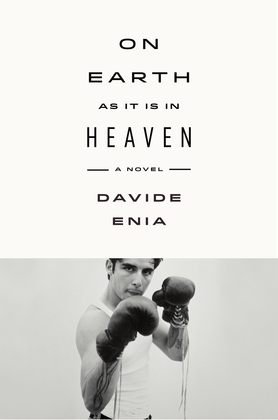 On Earth as It Is in Heaven

A dark, gripping coming-of-age tale that explores violence, friendship, family, and what it means to be a man

Summer, Palermo, early 1980s. The air hangs hot and heavy. The Mafia-ruled city is a powder keg ready to ignite. In a boxing gym, a fatherless nine-year-old boy climbs into the ring to face his first opponent.
So begins On Earth as It Is in Heaven, a sweeping multigenerational saga that reaches back to the collapse of the Italian front in North Africa and forward to young Davidù's quest to become Italy's national boxing champion, a feat that has eluded the other men of his family.
But Davide Enia, whose layered, lyrical, nonchronological novel caused a sensation when it was published in Italy in 2012, has crafted an epic that soars in miniature as well. The brutal struggles for dominance among Davidù's all male circle of friends; his strict but devoted grandmother, whose literacy is a badge of honor; his charismatic and manipulative great-uncle, who will become his trainer--the vicious scenes and sometimes unsympathetic characters Enia sketches land hard and true.On Earth as It Is in Heaven is both firmly grounded in what Leonardo Sciascia liked to call "Sicilitude" - the language and mentality of that eternally perplexing island - and devastatingly universal. A meditation on physical violence, love and sex, friendship and betrayal, boxing and ambition, Enia's novel is also a coming-of-age tale that speaks - sometimes crudely, but always honestly - about the joys and terrors of becoming a man.