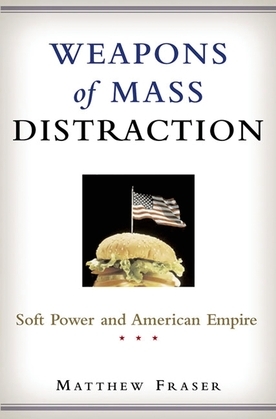 In its march to becoming the world's first hyper-power, the United States has been as dependent on its soft power - the allure of American lifestyles and culture - as it has been on the hard power of military might. In Weapons of Mass Distraction, Matthew Fraser examines the role of American pop cultural industries in international affairs.

Fraser focuses on the major areas of soft power - movies, television, pop music, and fast food - and traces the origins, history and current influence of these on U.S. foreign policy. He describes how the American film, television, and music industries enjoy a ubiquitous global presence that has made them indispensable to the U.S. government, which has often gone so far as to fund them directly, including the White House-sponsored radio station in the Middle East launched with the hopes of winning over Muslim youths with American pop songs.

A Coca-Cola lobbyist once famously declared that "The best barometer of the relationship of the U.S. and any other country is the way Coca-Cola is treated." Fraser proves this claim isn't to be taken lightly. He charts the global spread of the fast food industry, the role of Coca-Cola and McDonald's in American foreign policy and the recent rise of their opponents: the anti-globalization movement.

Do things really go better with Coca-Cola? Fraser's answer is a resounding yes. While American soft power remains a contentious issue, he believes it promotes values and beliefs that are ultimately good for the rest of the world. Still, what are the future implications of American soft power? Will national identities decline as the world order is transformed into a state of "electronic feudalism" where there is no central power? Weapons of Mass Distraction provides an engaging, enlightening, and provocative look at the future of American foreign policy and popular culture in the 21st century.