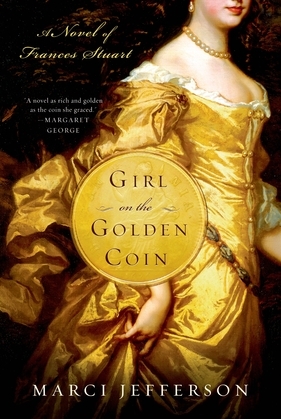 Girl on the Golden Coin

Impoverished and exiled to the French countryside after the overthrow of the English Crown, Frances Stuart survives merely by her blood-relation to the Stuart Royals. But in 1660, the Restoration of the Stuart Monarchy in England returns her family to favor. Frances discards threadbare gowns and moves to gilded Fontainebleau Palace, where she soon catches the Sun King's eye. But Frances is no ordinary court beauty--she has Stuart secrets to keep and her family to protect. King Louis XIV turns vengeful when she rejects his offer to become his Official Mistress. He banishes her to England with orders to seduce King Charles II and secure an alliance.

Armed in pearls and silks, Frances maneuvers the political turbulence of Whitehall Palace, but still can't afford to stir a scandal. Her tactic to inspire King Charles to greatness captivates him. He believes her love can make him a better man, and even chooses Frances to pose as Britannia for England's coins. Frances survives the Great Fire, the Great Plague, and the debauchery of the Restoration Court, yet loses her heart to the very king she must control. The discovery of a dangerous plot will force her to choose between love for herself and war for her beloved country.
Debut author Marci Jefferson's Girl on the Golden Coin brings to life a captivating woman whose beauty, compassion, and intellect impacted a king and a nation.