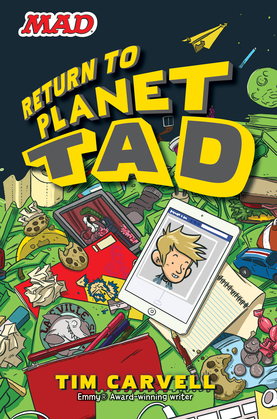 Tad is back and he's blogger than ever, in a laugh-out-loud sequel to the book Jon Stewart called "hilarious to anyone who ever went through, is currently in, might go to, or flunked out of middle school."

Tad may have survived seventh grade, but his troubles are just getting started. From his first sort-of date (a disaster) to his first semiformal dance (a bigger disaster), all Tad wants to do is make it out of this year alive. But that's not the only reason he keeps a blog. Tad also has a lot of important thoughts he needs to get off his chest, like: I don't get the phrase "you are what you eat." It seems to me like the only people that's true for are cannibals.

This highly illustrated and hilarious book is by the Emmy® Award-winning head writer of Last Week Tonight with John Oliver and is based on a column in MAD Magazine. Through a series of daily entries, readers are treated to a year in Tad's blog that will leave them in stitches.

MAD Magazine and all related characters and elements are trademarks of and © E.C. Publications. (s15)