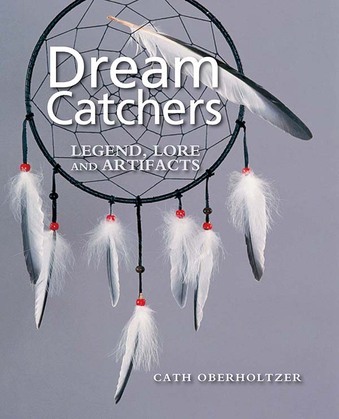 An investigation into the symbol of Native heritage.

In Ojibwe (or Chippewa in the United States) culture a dream catcher is a hand-crafted willow hoop with woven netting that is decorated with sacred and personal items such as feathers and beads. The Native American tradition of making dream catchers--hoops hung by the Ojibwe on their children's cradleboards to "catch" bad dreams--is rich in history and tradition.

Although the exact genesis of this intriguing artifact is unknown, legend has it that a medicine woman forms a circle from a willow branch and, with sinew, borrows the pattern from a spider, weaves a web, and hangs it over the bed of a sick child who recovers by morning. In some versions dream catchers catch good dreams and let bad ones through, while others catch bad dreams and let good dreams through. This legend accompanies dream catchers offered for sale across North America and beyond.

These themes, among others, are carried throughout this book which explores the appropriation of dream catchers by Native Americans of different nations, as well as the New Age movement. Dream Catchers also discusses the blending of two religious philosophies whereby Native and Christian icons are mixed.

More than 40 color photographs feature contemporary dream catchers and artifacts with informative captions that identify and comment on the different patterns, their significance and history. Dream Catchers features the work of Native artist Nick Huard who creates dream catchers in his studio in Kahnawake outside of Montreal.