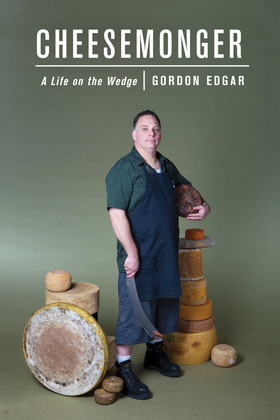 Cheesemonger: A Life on the Wedge

Witty and irreverent, informative and provocative, Cheesemonger: A Life on the Wedge is the highly readable story of Gordon Edgar's unlikely career as a cheesemonger at San Francisco's worker-owned Rainbow Grocery Cooperative. A former punk-rock political activist, Edgar bluffed his way into his cheese job knowing almost nothing, but quickly discovered a whole world of amazing artisan cheeses. There he developed a deep understanding and respect for the styles, producers, animals, and techniques that go into making great cheese.

With a refreshingly unpretentious sensibility, Edgar intertwines his own life story with his ongoing love affair with cheese, and offers readers an unflinching, highly entertaining on-the-ground look at America's growing cheese movement. From problem customers to animal rights, business ethics to taste epiphanies, this book offers something for everyone, including cheese profiles and recommendations for selecting the very best-not just the most expensive-cheeses from the United States and around the world and a look at the struggles dairy farmers face in their attempts to stay on and make their living from the land.

Edgar-a smart, progressive cheese man with an activist's edge-enlightens and delights with his view of the world from behind the cheese counter and his appreciation for the skill and tradition that go into a good wedge of Morbier.

Cheesemonger is the first book of its kind-a cheese memoir with attitude and information that will appeal to everyone from serious foodies to urban food activists.