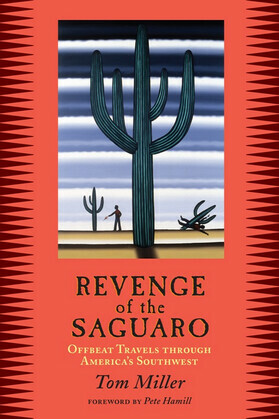 Revenge of the Saguaro

Tom Miller's Southwest is a vortex of cockfights and cantinas, of black velvet paintings and tacky bolo ties, of eco-militants, border-crossers, and eccentric characters whose outlook is as spare and elemental as the desert that surrounds them. This is Miller's turf. With wit and insight, he reveals how the clichés of romanticism and capitalism have run amuck in his homeland. When a saguaro cactus outside Phoenix kills its own assassin, it becomes clear that no other guide to the Southwest manifests such a clear moral vision while reveling in the joy of this magnificent land and its people. Originally published by National Geographic as Jack Ruby's Kitchen Sink, it received the Gold Award for Best Travel Book in 2000 from the Society of American Travel Writers.

Tom Miller has been writing about the American Southwest and Latin America for more than three decades. His ten books include The Panama Hat Trail, which follows the making and marketing of one Panama hat, and Trading with the Enemy, which Lonely Planet says "may be the best travel book about Cuba ever written." Miller began his journalism career in the underground press of the late '60s and early '70s, and has written articles for The New York Times, The Washington Post, The New Yorker, Smithsonian Magazine, Natural History, and Rolling Stone. He lives in Tucson, Arizona, with his wife, Regla.