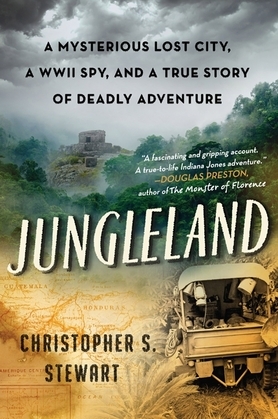 For fans of The Lost City of Z, The River of Doubt, and Lost in Shangri-La—a real-life Indiana Jones story, set in the mysterious jungles of Honduras.

"I began to daydream about the jungle...."

On April 6, 1940, explorer and future World War II spy Theodore Morde (who would one day attempt to assassinate Adolf Hitler), anxious about the perilous journey that lay ahead of him.

Deep inside “the little Amazon,” the jungles of Honduras’s Mosquito Coast—one of the largest, wildest, and most impenetrable stretches of tropical land in the world—lies the fabled city of Ciudad Blanca: the White City. For centuries, it has lured explorers, including Spanish conquistador Herman Cortes. Some intrepid souls got lost within its dense canopy; some disappeared. Others never made it out alive. Then, in 1939, Theodore Morde claimed that he had located this El Dorado-like city. Yet before he revealed its location, Morde died under strange circumstances, giving credence to those who believe that the spirits of the Ciudad Blanca killed him.

In Jungleland, Christopher S. Stewart seeks to retrace Morde's steps and answer the questions his death left hanging. Is this lost city real or only a tantalyzing myth? What secrets does the jungle hold? What continues to draw explorers into the unknown jungleland at such terrific risk? In this absorbing true-life thriller, journalist Christopher S. Stewart sets out to find answers—a white-knuckle adventure that combines Morde’s wild, enigmatic tale with Stewart’s own epic journey to find the truth about the White City.