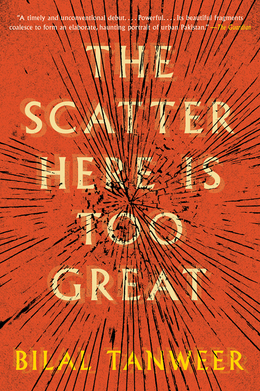 The Scatter Here Is Too Great

A vivid and intricate novel-in-stories, The Scatter Here Is Too Great explores the complicated lives of ordinary people whose fates unexpectedly converge after a deadly bomb blast at a train station in Karachi, Pakistan's largest city.

Comrade Sukhansaz, an old communist poet, is harassed on a bus full of college students minutes before the blast. His son, a wealthy, middle-aged businessman, yearns for his own estranged child. A young man, Sadeq, has a dead-end job snatching cars from people who have defaulted on their bank loans, while his girlfriend spins tales for her young brother to conceal her own heartbreak. An ambulance driver picking up the bodies after the blast has a shocking encounter with two strange-looking men whom nobody else seems to notice. And in the midst of it all, a solitary writer, tormented with grief for his dead father and his decimated city, struggles to find words.

Bilal Tanweer reveals the pain, loneliness, and longing of these characters and celebrates the power of the written word to heal lives and communities plagued by violence. Elegantly weaving together these voices into a striking portrait of a city and its people, The Scatter Here Is Too Great is a tale as vibrant and varied in its characters, passions, and idiosyncrasies as the city itself.