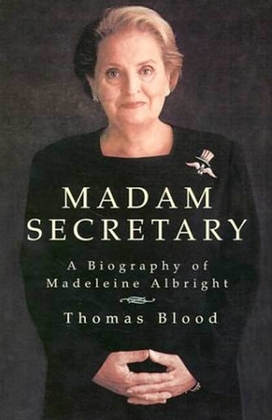 No American envoy has ever burst on the diplomatic scene and grabbed center stage in the theater of foreign relations like Madeleine Albright. Navigating difficult terrain as few can, Thomas Blood provides exclusive interviews with, and revealing anecdotes from, politicians, friends, adversaries, and colleagues, including former Secretary of State Warren Christopher, Senators Leahy, Mikulski, Kerrey, Helms, Reid, and Rockefeller, and House Minority Leader Dick Gephardt. This unique biography reveals the dramatic story of the first woman U.S. Secretary of State. Rather than providing a simple chronology, Blood focuses on the defining moments in Madeleine Albright's life, identifying the periods that best open a window on the Secretary of State's uncanny ability to triumph over adversity, her unparalleled success in politics and her meteoric rise to dominance in the world of foreign policy. From her family's thrilling escape from Czechoslovakia to her astounding rise to power to her victories and setbacks as the head of American foreign policy, Madeleine Albright's life unfolds like a major motion picture. An immensely readable biography that illuminates key experiences in Albright's career and personal life, Madam Secretary introduces us to Madeleine Albright the person, the politician, the policymaker-- a woman for our times.