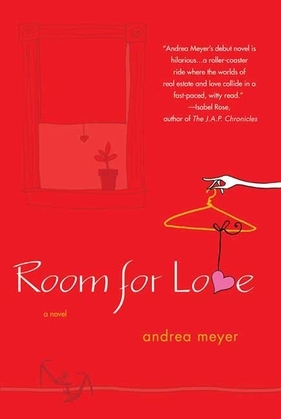 In Room for Love by Andrea Meyer, Jacquie Stuart has just turned thirty-two and she wants to do a major rewrite on her life. Her salary at a snarky film magazine barely covers her mortgage, her bratty sister has staked permanent claim to her couch, her best friend is in an obscenely happy marriage, and the only guy who really gets her is gay. Worst of all, she keeps falling for broke, self-involved commitment-phobes. Needing moonlighting money, Jacquie gets the idea of investigating a new dating trend?looking for Mr. Right in the "Roommate Wanted" ads. After a bunch of colorful near-misses that bring her into the slums of the East Village, the brownstones of Brooklyn, and the dingier digs of the Upper East Side, Jacquie thinks she's finally found the man she's been looking for and stuns her friends by moving out of her beloved apartment?and into his. Complications ensue when her live-in love reveals some alarming imperfections, the irresistible artist who dumped her wants her back? and what is up with the mystery man living in the charming one-bedroom she left behind? Jacquie has been looking for love in other people's homes all over town, but could the key to her happiness lie right under her very own roof?