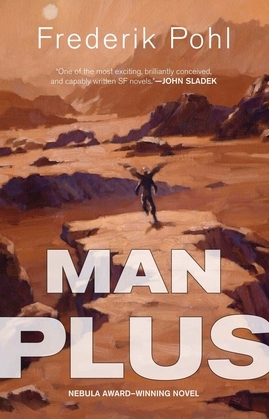 The Nebula Award?winning masterwork by the author of Gateway

In the not-too-distant future, a desperate war for natural resources threatens to bring civilization to a crashing halt. Nuclear warships from around the globe begin positioning themselves as the American government works feverishly to complete a massive project to colonize Mars. Former astronaut Roger Torraway has agreed to be transformed by the latest advances in biological and cybernetic science into something new, a being that can survive the rigors of Mars before it is terraformed. Becoming Man Plus will allow him to be the linchpin in opening the new Martian frontier?but not without challenging his humanity as no man has ever been challenged before.

A bestselling, Nebula Award?winning novel when first published more than thirty years ago, this book is now more relevant than ever, as the battle between corporate interests and those who seek to save Earth's natural resources steadily escalates. The question of where man will go once the world's food, water, and oil have run out has yet to be answered. Man Plus by Frederick Pohl is a brilliantly imagined, compelling possible scenario that has enthralled countless readers.