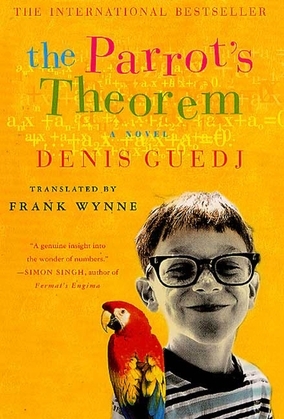 Mr. Ruche, a Parisian bookseller, receives a bequest from a long lost friend in the Amazon of a vast library of math books, which propels him into a great exploration of the story of mathematics. Meanwhile Max, whose family lives with Mr. Ruche, takes in a voluble parrot who will discuss math with anyone. When Mr. Ruche learns of his friend's mysterious death in a Brazilian rainforest, he decides that with the parrot's help he will use these books to teach Max and his brother and sister the mysteries of Euclid's Elements, Pythagoras's Theorem and the countless other mathematical wonders. But soon it becomes clear that Mr. Ruche has inherited the library for reasons other than enlightenment, and before he knows it the household is racing to prevent the parrot and vital, new theorems from falling into the wrong hands.

An immediate bestseller when first published in France, The Parrot's Theorem charmingly combines a straightforward history of mathematics and a first-rate murder mystery.