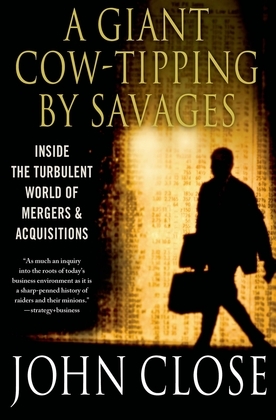 A Giant Cow-Tipping by Savages

Modern mergers and acquisitions, or M&A as it's more commonly known, is a new phenomenon. The buying and selling, the breaking up and combining of companies-the essence of M&A-has been a part of commerce throughout history, but only in our era has M&A itself become a business. In 2007, before the recession hit, it was a $4.4 trillion global enterprise. And yet, it remains largely unexplored. Discrete stories have been pulled from the annals of M&A, both true and fictionalized, that have become touchstones for wealth and excess. Who can forget Gordon Gekko and his "Greed is Good" speech? But while there have been a few iconic characters and tales to emerge, no one has told the rich history of M&A, until now. This is a look into that world and the people who created it. This reads like Dallas meets Wall Street, told through an intriguing narrative that not only brings to light in gritty detail all of the back room drama of such powerful players as Carl Icahn and Ronald Perelman, Marty Lipton and Joe Flom, Jimmy Goldsmith and Sumner Redstone, but also reveals how the new generation, including activist whirlwind Bill Ackman and iconoclastic new Delaware judge Leo Strine, will dominate the next tsunamic, and imminent, M&A boom.