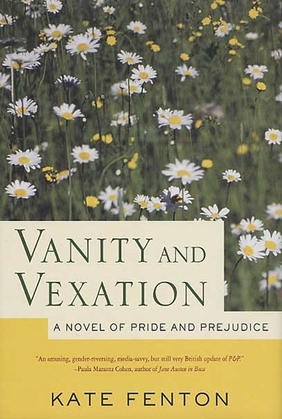 "Tall, dark, and arrogantly handsome---not to mention distinguished, powerful, and rolling in money. Mr. Darcy? No, that's just the woman director of Pride and Prejudice," reports Nicholas Llewellyn Bevan, impoverished novelist and occasional (reluctant) journalist, when a TV production company trundles into his sleepy North Yorkshire valley. Amusedly he watches these glamorous invaders combine the filming of Jane Austen's romantic classic with the much less modest pursuit, off-camera, of real-life romances with the locals.

Under his very nose, his bashful handsome neighbor John is plucked out of a village dance by the famously gorgeous (and wealthy) leading actress, Candia Bingham, with whom he at once falls completely in love. Our would-be hero manages only to trip over the black-booted foot of the intimidating and imperious director, Mary Dance. So he's amazed---and a little bit alarmed---when her steely eye seems to be straying his way.

A witty and entertaining update on Jane Austen's Pride and Prejudice, Austen fans old and new will adore Vanity and Vexation's modern take on her sublime blueprint of the romance game complete with sex, money, and power. With an assured and respectful hand, in the context of the contemporary world, Kate Fenton has penned a riveting story with a hilarious twist.

After all, it is a truth universally acknowledged that Hollywood taking an interest---better still an option---in a novelist's work is a surefire way to propel that novelist into serious sales figures and the bestseller lists.