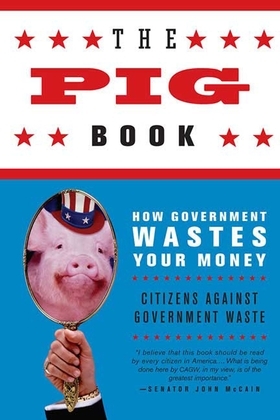 The federal government wastes your tax dollars worse than a drunken sailor on shore leave. The 1984 Grace Commission uncovered that the Department of Defense spent $640 for a toilet seat and $436 for a hammer. Twenty years later things weren't much better. In 2004, Congress spent a record-breaking $22.9 billion dollars of your money on 10,656 of their pork-barrel projects. The war on terror has a lot to do with the record $413 billion in deficit spending, but it's also the result of pork over the last 18 years the likes of:

- $50 million for an indoor rain forest in Iowa
- $102 million to study screwworms which were long ago eradicated from American soil
- $273,000 to combat goth culture in Missouri
- $2.2 million to renovate the North Pole (Lucky for Santa!)
- $50,000 for a tattoo removal program in California
- $1 million for ornamental fish research

Funny in some instances and jaw-droppingly stupid and wasteful in others, The Pig Book proves one thing about Capitol Hill: pork is king!