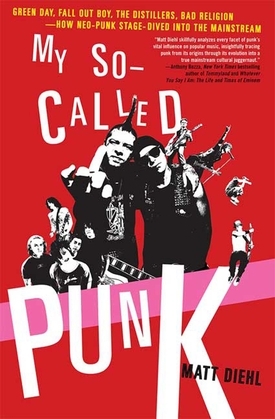 When it began, punk was an underground revolution that raged against the mainstream; now punk is the mainstream. Tracing the origins of Grammy-winning icons Green Day and the triumphant resurgence of neo-punk legends Bad Religion through MTV's embrace of pop-punk bands like Yellowcard, music journalist Matt Diehl explores the history of new punk, exposing how this once cult sound became a blockbuster commercial phenomenon. Diehl follows the history and controversy behind neo-punk?from the Offspring's move from a respected indie label to a major, to multi-platinum bands Good Charlotte and Simple Plan's unrepentant commercial success, through the survival of genre iconoclasts the Distillers and the rise of "emo" superstars like Fall Out Boy.
My So-Called Punk picks up where bestselling authors Legs McNeil and Jon Savage left off, conveying how punk went from the Sex Pistol's "Anarchy in the U.K." to anarchy in the O.C. via the Warped Tour. Defining the sound of today's punk, telling the stories behind the bands that have brought it to the masses and discussing the volatile tension between the culture's old and new factions, My So-Called Punk is the go-to book for a new generation of punk rock fans.