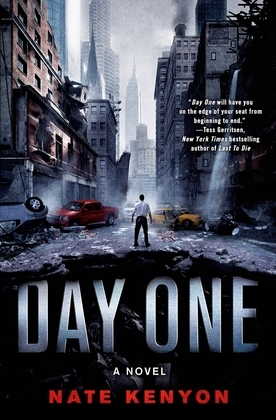 THE FUTURE IS HERE AND IT DOESN'T NEED YOU

In Nate Kenyon's Day One, scandal-plagued hacker journalist John Hawke is hot on the trail of the explosive story that might save his career. James Weller, the former CEO of giant technology company Eclipse, has founded a new start-up, and he's agreed to let Hawke do a profile on him. Hawke knows something very big is in the works at Eclipse---and he wants to use the profile as a foot in the door to find out more.

After he arrives in Weller's office in New York City, a seemingly normal day quickly turns into a nightmare as anything with an Internet connection begins to malfunction. Hawke receives a call from his frantic wife just before the phones go dead. Soon he and a small band of survivors are struggling for their very lives as they find themselves thrust into the middle of a war zone---with no obvious enemy in sight.

The bridges and tunnels have been destroyed. New York City is under attack from a deadly and brilliant enemy that can be anywhere and can occupy anything with a computer chip. Somehow Hawke must find a way back to his pregnant wife and young son. Their lives depend upon it . . . and so does the rest of the human race.