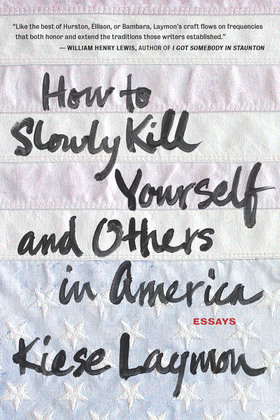 How to Slowly Kill Yourself and Others in America

by Kiese Laymon (Author)
Non-Fiction Literary collections Essays Social science American African American
Author and essayist Kiese Laymon is one of the most unique, stirring, and powerful new voices in American social and cultural commentary. How to Slowly Kill Yourself and Others in America is a collection of Laymon's essays, touching on subjects ranging from family, race, violence, and celebrity to music, writing, and coming of age in the rural Mississippi Gulf Coast. Laymon's writing is unflinchingly honest, while also being smart, lacerating, and unexpectedly funny.

In How to Slowly Kill Yourself and Others in America, Laymon deals in depth with his own personal story, which is filled with trials (and reflections on those trials) that illuminate under-appreciated aspects of contemporary American life. As revealed in the book's title essay, Laymon attended three colleges before earning his undergraduate degree. He was suspended from the first of these institutions, Millsaps College, following a probationary period resulting from a controversial essay he published on campus. As the school's president described it, the "Key Essay in question was written by Kiese Laymon, a controversial writer who consistently editorializes on race issues." Controversy seemed to follow this young writer, but as he himself puts it, "my job is to ask questions, to broaden the scope of American literature by broadening the scope of who is written to and imaginatively writes back."

Laymon voice is something new and unexpected in contemporary American writing, mixing a colloquial voice with acerbic wit, sharp insights, and blast-furnace heat that calls to mind no one so much as a black 21st-century Mark Twain. Much like Twain, Laymon's writing is steeped in controversial issues both private and public. From his biting critiques of race politics to revelations of his own internal struggles with American "blackness," Laymon taps into an ongoing conversation that is played out consciously and subconsciously across all of our artistic, cultural, political, and economic realities.

This collection introduces Laymon as a writer who balances volatile concepts on a razor's edge, and who chops up much-discussed and often-misunderstood topics with his scathing humor and fresh, unexpected takes on the ongoing absurdities, frivolities, and calamities of American life.