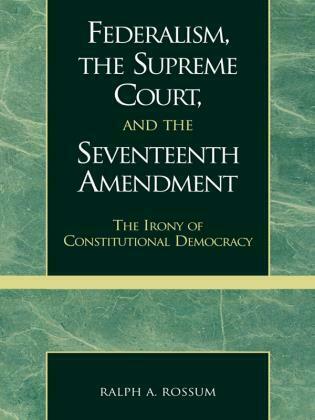 Federalism, the Supreme Court, and the Seventeenth Amendment

The Irony of Constitutional Democracy
by Ralph A. Rossum (Author)
Buy for $51.00 Excerpt
Nonfiction Social science Political science Constitutions Law History of law
warning_amber
One or more licenses for this book have been acquired by your organisation details

Abraham Lincoln worried that the 'walls' of the constitution would ultimately be leveled by the 'silent artillery of time.' His fears materialized with the 1913 ratification of the Seventeenth Amendment, which, by eliminating federalism's structural protection, altered the very nature and meaning of federalism. Ralph A. Rossum's provocative new book considers the forces unleashed by an amendment to install the direct election of U.S. Senators. Far from expecting federalism to be protected by an activist court, the Framers, Rossum argues, expected the constitutional structure, particularly the election of the Senate by state legislatures, to sustain it. In Federalism, the Supreme Court, and the Seventeenth Amendment Rossum challenges the fundamental jurisprudential assumptions about federalism. He also provides a powerful indictment of the controversial federalist decisions recently handed down by an activist U.S. Supreme Court seeking to fill the gap created by the Seventeenth Amendment's ratification and protect the original federal design. Rossum's masterful handling of the development of federalism restores the true significance to an amendment previously consigned to the footnotes of history. It demonstrates how the original federal design has been amended out of existence; the interests of states as states abandoned and federalism left unprotected, both structurally and democratically. It highlights the ultimate irony of constitutional democracy: that an amendment intended to promote democracy, even at the expense of federalism, has been undermined by an activist court intent on protecting federalism, at the expense of democracy.